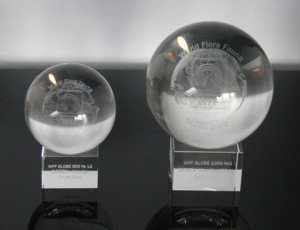 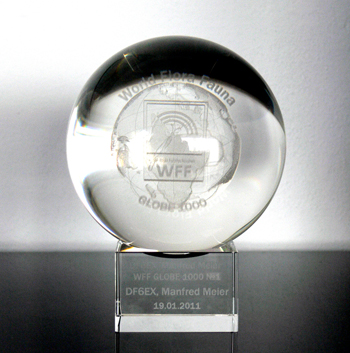 My WFF-major activities started during 2009 and reached an extreme top-level during 2010.
I have actually far more than 2000 confirmed WFF-contacts in the database and around 1200 confirmed references. Nearly whole 2010 I worked by „to work“-lists, put up my own WFF-blog and had around 250 unique visitors each day on the web-site. My focus at the beginning of 2010 was to reach the plaques and as a long-distance plan to reach the globe 500. However things changed rapidly and the community as well as the activities were growing dramatically. This resulted finally that just before I went off the air in november 2010 I already had more than 1000 WFFs confirmed.
The WFF-globe is an extremely professional produced product, which is not cheap however looking great.
Got my globe 1000 number 1 just some weeks ago via registered mail from russia. The weight is more than 2,5 kg.

My xyl just occupied it for the living-room. She said it´s looking to good just to stay in the shack.