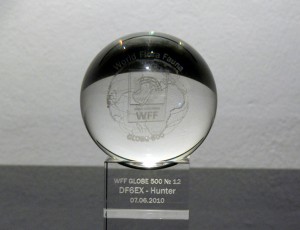 After a long time my first ordered WFF-globe 500 from march 2010 arrived safely. Valery RW3GW promised that the deliveries from plaques, awards and globes will be reorganized starting february 2011 and said that the extreme fast growing of the whole WFF-program resulted in extreme delays where he excuse for. Look forward how the new WFF-season will start. Picture shows the small globe (500 WFFs needed confirmed).
My WFF-Globe 1000 Nr. 1 will follow in a short time. Anyway long delay the award is really worth to wait for.

Of course when I started to collect for the 500 at the beginning of 2010 it was a very hard task till april where you really had to spend long time in front of the radio. With the exploding number of parks in the middle of the year everything lost a bit the relationship because sometimes 20 new parks on a weekend.
Hopefully when something will be reorganized in WFF somebody will also take care about this to get WFF back to a really good program.

1. Rules for issue of WFFs should be equal in each country
(this would avoid that some countries have 500 and other only 20 parks)

2. New park activations should be made with an official application to the comitee as it´s stated on the WFF-website
(this applications should be also visible for other applicants that you know what area you work and whats the background from this nature-reserve because we state “Lets save the green planet” so we should know also a bit from the area)

3. operations should produce a minimum number of QSO
(only if this number is reached upload to WFF-database will be done)